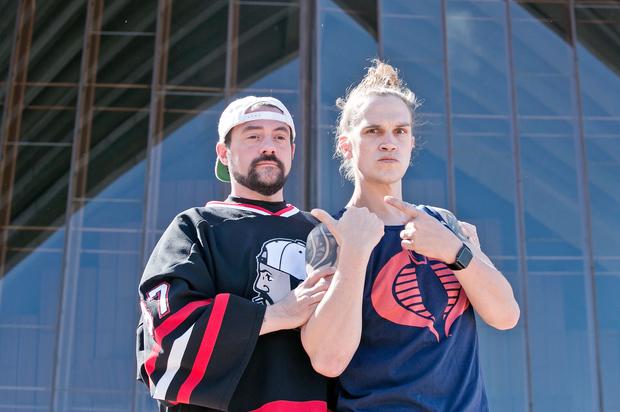 Jay and Silent Bob are staples in the world of stoner comedies. Director and Silent Bob actor Kevin Smith introduced the duo to the world in 1994 with Clerks. From there Jay and Silent Bob appeared in a series of movies in Smith’s View Askewniverse, which was the stoner’s version of the Marvel Cinematic Universe before it existed. The string of films that feature the two hilarious buddies include Mallrats, Dogma, Chasing Amy, and Clerks II. Smith announced that he would continue with his Jay and Silent Bob adventures with a new film, and now he has blessed us with a first look at the movie.

Entitled Jay And Silent Bob Reboot, the new movie will once again pit the two titular characters against Hollywood. According to UPROXX, Kevin Smith stated that the characters, “find out that Hollywood is making a reboot of that old movie that they had made about them, and they have to go across the country to Hollywood to stop it all over again,” Smith said. “It’s literally the same f*cking movie all over again. It’s a movie that makes fun of sequels and remakes and reboots while being all three at the same time.”